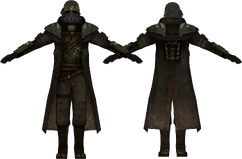 The advanced riot gear is a more advanced version of the standard riot gear. The helmet gives the effect "Red Vision", which gives the user low-visibility sight while in sneak mode between 6:00 PM to 6:00 AM or while indoors. This will toggle from on to off upon exiting sneak mode.

Found on the body of a ghoulified NCR riot control officer in The Crow's Nest. This NCR trooper will be hanging out a window closest to the cave to the west. However, detonating the warhead before going to the Crow's Nest might cause the trooper to be missing. 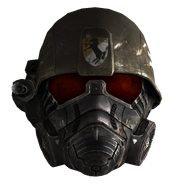