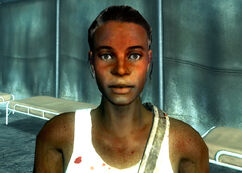 “Congratulations on making it to the HQ. It's pretty fierce out there. Here's your chem ration. I'm doctor Adami. Come see me if you need patching up.”

Doctor Adrienn Adami is the doctor for the United States Army at their field headquarters in the Anchorage Reclamation simulation in 2277.

The overworked and slightly overwhelmed Dr Adami is the head of the medical staff under General Constantine Chase. Apart from ministering to the physical and mental wounds of the U.S. Army soldiers fighting the Chinese in the bleak Alaskan tundra, she is also tasked with distributing Psycho rations to increase combat readiness of those not yet incapacitated. The experimental combat drug created by Chase's pharmaceutical company had only the barest necessary clinical trials done, which highlighted adverse side effects (dementia, aggression, etc.), leading Adami to question her relationship with the Hippocratic Oath. However, as far as the simulation is concerned, she believes it necessary to give the groundpounders an advantage in the fight, especially those who have family at Anchorage.[1]

It appears that her portrayal in the simulation is at odds with reality. Her records implicated Chase in the Psycho drugging scandal before the Great War, whereas in the simulation she believes it is a necessary evil.[2]

When first approached by the player character, she provides a "chem ration" of five doses of Psycho.

Adrienn Adami appears only in a simulation in the Fallout 3 add-on Operation: Anchorage.

Retrieved from "https://fallout.fandom.com/wiki/Adrienn_Adami?oldid=3414392"
Community content is available under CC-BY-SA unless otherwise noted.