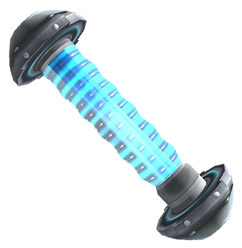 The adapted biogel is a consumable added to Fallout 3 in the Mothership Zeta add-on.

The adapted biogel is an improved version of the alien biogel. It restores a minimum of 80, up to a maximum of 150 Hit Points based on the Medicine skill (180 with Fast Metabolism).

Both the alien and adapted biogel have a 50% chance to cause one of ten random effects that lasts 30 seconds. Using multiple biogels simultaneously can cause more than one effect, but overlapping effects will not stack (for example, -1 PE, +2 AG, and -1 IN can apply at the same time, but -1 IN and -1 IN does not become -2 IN).

The ten "Biochemical Anomaly" effects are as follows:

This makes the adapted biogel by far the best healing item in the game. It surpasses stimpaks in healing, as well as a 25% chance for a temporary positive side effect (50% chance for a side effect, and a 50% chance that effect is positive). Even if a negative side effect is acquired, the radiation and deductions are barely noticeable. Lowered Intelligence does not reduce skill points received when leveling up, nor does reduced Endurance lower HP (it just reduces resistances).

Adapted biogel can only be obtained from Elliott, by asking him to convert any alien biogel currently in inventory. This option is available from the first encounter with him onward, including after completing This Galaxy Ain't Big Enough... Because of this, and because one of the random items Sally can provide (when asked if she's found anything on the ship) is alien biogel, the potential supply of adapted biogel is effectively unlimited.

Retrieved from "https://fallout.fandom.com/wiki/Adapted_biogel?oldid=3233627"
Community content is available under CC-BY-SA unless otherwise noted.