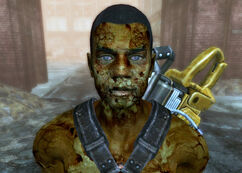 “I'm not cheery, really. I've just accepted my role here. I found a book once. Midea read part of it to me. It said: "The Master doesn't try to be powerful; he is powerful. An ordinary man keeps reaching for power and thus never has enough."”

Adan is a philosophical slave worker in the Pitt in the year 2277.

Adan spends his days in front of the entrance to the Mill, sawing away at a destroyed bus with his steel saw. This is all he does until the mission Free Labor, in which his body can be found in the same location, being killed during the chaos caused by the uprising.

Retrieved from "https://fallout.fandom.com/wiki/Adan?oldid=3348129"
Community content is available under CC-BY-SA unless otherwise noted.