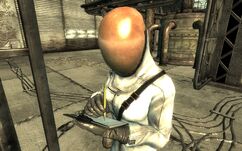 Scientist without her mask

This scientist requested that her older brother hide away a stash of flamer fuel and an incinerator for her. Her brother was able to successfully stash the fuel for her; however, he was unable to get his hands on an incinerator and added in a note to her if she wanted one, she'd have to get it herself.

She works all day in one of the hangers, occasionally pausing to study the various consoles and control panels near her.

The Adams Air Force Base scientist appears only in the Fallout 3 add-on Broken Steel.

Retrieved from "https://fallout.fandom.com/wiki/Adams_Air_Force_Base_scientist?oldid=3384433"
Community content is available under CC-BY-SA unless otherwise noted.