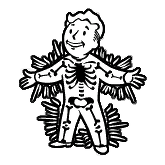 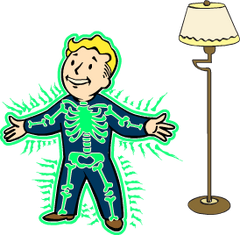 “With the Adamantium Skeleton perk, your limbs only receive 50% of the damage they normally would.”— Fallout 3 in-game description.

Adamantium Skeleton is a perk in Fallout 3, Fallout: New Vegas, Fallout 4 and Fallout 76.

Reduced limb damage when the player character's skeleton has been infused with indestructible metal.

“Your skeleton has been infused with indestructible metal, which lessens the hobbling problems associated with crippling injuries. Sometimes your limbs are struck by foes, but most of the time such damage is caused by falling. Seek medical attention (or a bed) far less often than normal by choosing this perk.”— Fallout 4 Vault Dweller's Survival Guide description

“Your skeleton has been infused with indistructable metal!” 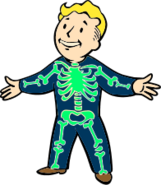 Fallout 4 loading screen
Add a photo to this gallery
Retrieved from "https://fallout.fandom.com/wiki/Adamantium_Skeleton?oldid=3502551"
Community content is available under CC-BY-SA unless otherwise noted.