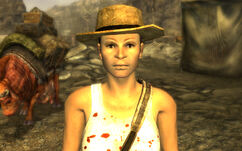 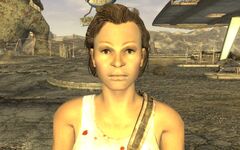 Ada Straus without her hat

“I've gotta hand it to you. You've done good things for Novac, but you've also got 'em a little scared of you. And that's great for business. As long as you keep it coming, I'll get you some things a little cheaper than they should be.”

Dr. Ada Straus is a drug dealer,[1] medical supplies merchant, and "doctor" plying her trade in the town of Novac in 2281. She and her entourage circle the area west of the motel.

Despite an almost complete lack of medical education, Ada Straus is the "doctor" who can be found working in Novac. Despite not having a medical degree, this drug dealer will still perform the medical procedures that someone might need; such as general practice, radiation and or addiction removal, while giving horrible advice afterward. She does not keep care of her medical supplies,[2] and bolsters her income by trafficking drugs and selling salvaged weapons, like laser pistols and energy cells. Her bodyguards have taken a notice to her peculiar practices, particularly her apparent lack of knowledge of medicine or disinclination to pay them for her practices.

It seems the drugs she uses to treat people with are effective, as nobody has ran her out of town yet, even if her response to exposure to radiation includes suggestions that irradiation helps with reading at night, can be removed with baths in tomato juice, or inquiries about using the irradiated person as a makeshift oven for toast.

Ada Straus is a doctor of questionable skills who can be found working in Novac with her two bodyguards. The group moves around the area behind the Dino Dee-lite Motel, stopping periodically near the pack brahmin at the tent, and the north and west road entrances to the town.

Despite her hapless demeanor, the services Ada provides are the same as those of any other wasteland doctor. In addition to medical supplies, she also sells other items like laser pistols and energy cells.

Retrieved from "https://fallout.fandom.com/wiki/Ada_Straus?oldid=3278353"
Community content is available under CC-BY-SA unless otherwise noted.