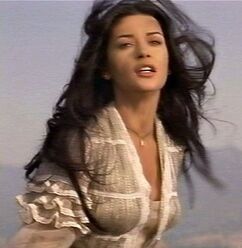 Acquire Jillian was going to be a quest in Van Buren, the canceled Fallout 3 by Black Isle Studios. It is located at the Reservation.

There are several ways to acquire Jillian. The most peaceful, goody-goody way is through the quest "Hook up Betty and Hank by freeing (acquiring) Jillian." Another way is to blackmail Hank into releasing Jillian into the player's custody. The player will need to find out about Hank's dissenting ways and threaten to use this information against him if he does not release Jillian. Fearing the Endless Walk (see Betty, third paragraph), Hank will agree, provided the player has either Deceive or Persuade > 50.

Still another way is to speak to Measles directly (Horatio will steer the player to Measles) and explain the need for Jillian (the Big MT story). Measles will be intrigued and want the player to speak to his leader, Dr. Willem Clark. If Clark says yes, then Jillian will go with the player. However, Willem will have a few favors to ask in return (other quests).

Of course, the final way is to go psycho on everyone and try to blow the filthy ghouls away. The player should be prepared for one hell of a fight, though, because there are several guards with assault rifles and three manned gattling guns to contend with.

Retrieved from "https://fallout.fandom.com/wiki/Acquire_Jillian?oldid=2691394"
Community content is available under CC-BY-SA unless otherwise noted.