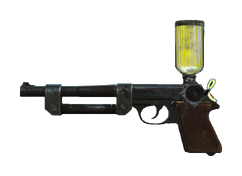 The Acid Soaker is a weapon in the Fallout 4 add-on Nuka-World.

The Acid Soaker is a small pistol of the same model as the Deliverer that has been jury-rigged to fire acid concentrate from a small glass container rather than 10mm rounds. It sprays an acidic solution at targets, causing poison damage and reducing the Damage Resistance of the target. It has an intake that dispenses liquid from a glass jar that is screwed into place. The solution visibly drains as the weapon is fired. The Acid Soaker cannot be modified at a weapons workbench. Its damage is only affected by the Bloody Mess perk.

Despite the name, the junk item acid cannot directly be used as ammunition, however, it is a component required to craft the ammunition for the weapon at a chemistry station.

Retrieved from "https://fallout.fandom.com/wiki/Acid_Soaker?oldid=3443328"
Community content is available under CC-BY-SA unless otherwise noted.