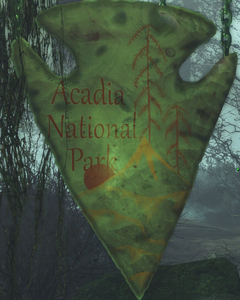 Acadia National Park is a location on the Island in 2287.

Before the war, Acadia National Park was a major attraction. It featured trails, campgrounds, and other recreational areas, seeking to protect the wildlife and natural features of the Island while providing a space for sightseeing. Hunting and fishing were restricted, with licenses purchasable from the National Park HQ.[1]

The park also contained a wind farm, part of an effort by GDA Fusion to improve their reputation, especially to senators and government representatives vacationing in the park. When the Great War struck, the wind farm was in the process of being shut down following a corporate review, where it was determined that investing money into a rival industry was against the company's interests.[2]

Acadia National Park was a large national park taking up the northeast quadrant of the Island. The park consisted of the administrative offices, the visitor's center, Acadia National Observatory, and numerous campground areas.

The park is based on the real-world Acadia National Park, located on Wikipedia:Mount Desert Island in Maine.

Retrieved from "https://fallout.fandom.com/wiki/Acadia_National_Park?oldid=2710239"
Community content is available under CC-BY-SA unless otherwise noted.