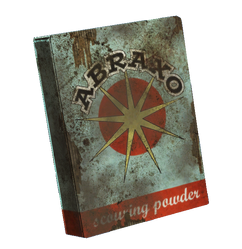 “Abraxo. For all your cleaning needs...”— Sole Survivor

Abraxo cleaner can be broken down into its individual components for use in crafting.

It can also be combined at a chemistry station to produce Mentats, Buffout, Daddy-O, or Mind Cloud syringes, though the Industrial Grade version cannot be used this way.

Abraxo cleaner can be first seen in the Sole Survivor's house and cannot be picked up during the intro of the game.

375 fixed locations in the Commonwealth, most commonly found within garages, janitor's closets and in basements. Including: 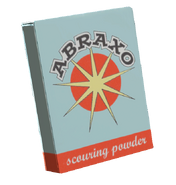 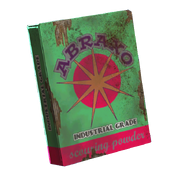 Pre-War billboard
Add a photo to this gallery
Retrieved from "https://fallout.fandom.com/wiki/Abraxo_cleaner_(Fallout_4)?oldid=3355637"
Community content is available under CC-BY-SA unless otherwise noted.