Curator in the Capitol Preservation Society

“Can you imagine a country like the U.S.A. without it? It would be the same empty feeling as not knowing your birth mother. We are children of this country and to respect it is to know about it.”

Abraham Washington is the owner and curator of the Capitol Preservation Society in Rivet City in 2277.

Washington, who is 45 in 2277,[Non-game 1] continues the work started by his parents, who were completely devoted to their passion: history. The Capitol Preservation Society is, for all intents and purposes, his one and only love, and he leads a life of a hermit within. He often talks to himself, is devoid of social skills, and holds a deeper emotional connection to his collection than most humans.[Non-game 1] Amongst other things, he maintains a semi-private yet simultaneously boastful, misogynistic attitude. Evidence of this is seen on his terminal, located in the side bedroom across from the main entrance to the Capitol Preservation Society. The end of the terminal entry "Declaration Expedition" states, "That's what I get for getting a woman to do a man's job!", referring to Sydney, the previous relic hunter he sent in search of the Declaration of Independence, whom he assumes likely ran off with the caps that he paid her in advance.[1]

Washington has a peculiar understanding of history. Though he has a very proper respect for historical artifacts and understands the importance of preserving them, he lacks the necessary scientific regimen to properly reconstruct it and ends up with a strange version of history. He also has an unhealthy obsession with Abraham Lincoln, leading him to compare all U.S. presidents to him and discrediting everyone, including other U.S. leaders such as James Monroe. However, his drive to preserve the nation's history also leads him to great things, such as hiring travelers to recover important artifacts and preserve them in Rivet City.[2]

As its curator, he is normally seen walking around Capitol Preservation Society rooms and sometimes around other parts nearby. According to Sydney, he asks every traveler who comes through to retrieve the Declaration of Independence.

“On July the 4th in 1776, a group calling themselves the Second Judgmental Congress got together at Fort McHarry in Maryland. After a ceremony which ended with Paul Revere singing the famous battle hymn known as the National Anthem, the document was signed. From there, it was sent to England by plane presumably and presented to King George himself. Thus began the Evolutionary War.”

When asked about the history of the Declaration of Independence, Washington will produce the above story. It is an example of the desolation caused in historical knowledge caused by the Great War. The primary errors are the mention of "Fort McHarry" (a maiming of Fort McHenry, further incorrect due to the fact that it was built years afterwards and the Declaration was signed in Philadelphia, not Maryland), the "Second Judgemental Congress" (instead of the Second Continental Congress), the fact that it was taken to Britain by plane, and calling the American Revolutionary War the "Evolutionary War." However, Three Dog seems to know more about the document's history.

* Only after being sold Lincoln's repeater.

Since he is considered "essential," attempting to kill him will only result in him losing consciousness. When he awakes, he will always be non-hostile.

His name is a portmanteau of Abraham Lincoln and George Washington, two of the United States' most influential presidents. 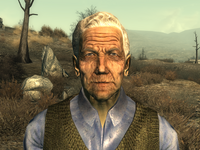 Abraham Washington without his glasses