Abominations are the result of alien experiments on abducted humans, and are found only on board Mothership Zeta in 2277.

Abominations are captured human test subjects whose bodies have been hybridized with alien DNA with the intention of creating biological weapons.[1] The transformation process turns the subjects into feral, half human, half-alien menacing creatures that are hostile to anything that is not one of them,[Non-canon 1][Non-canon 2] including their alien creators. It also removes all discernible sexual characteristics, leaving them with an androgynous appearance. Despite this, it is evident that these creatures retain some degree of their humanity and self-awareness. When killing an abomination, sometimes they say "thank you" as if to suggest that they had wanted to die all along.

Their known creation history and asexual appearance seem very similar to super mutants, while their hostility and lack of self-preservation are reminiscent of feral ghouls.

After spotting a target, an abomination will point at it and wail loudly, and then attack with its long arms (in a manner that is very similar to feral ghouls), making them difficult to engage with unarmed or melee weapons. Abominations are a fairly standard opponent and are easily killed with alien weapons. When killed, their bodies often contain various conventional alien items, such as alien power modules or alien epoxy. Sometimes, however, they contain items commonly found on the bodies of feral ghouls, such as packs of cigarettes, pre-War money, harmonicas and other miscellaneous items, which serve to reinforce the abominations' human origin. In a few rare cases, they can also have pre-War books.

Abominations can be found in the biological research section of Mothership Zeta.

Abominations appear only in the Fallout 3 add-on Mothership Zeta.

The way that the abominations point and screech when they notice the player character is a reference to the 1978 remake of the movie Invasion of the Body Snatchers, in that the alien "pod-people" point and screech in the same way whenever they discover a real human. 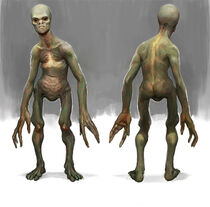 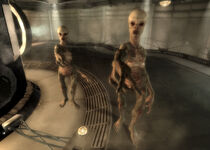 Chilling your spine! Invasion of the Body Snatchers reference