The Abilene Kid LE BB gun is a variant of the standard BB gun, on both sides of the weapon's stock is the inscription "Abilene Kid ~Limited Edition~ 1 of 200." Although it shows no obvious significant differences to the standard version when examined in the Pip-Boy 3000, it has a slightly higher critical chance and a dramatically higher critical damage bonus, boasting an astounding 70 points of added damage for a critical hit. With the Better Criticals perk, a critical hit from the Abilene Kid LE BB gun is on par with one from a sniper rifle, doing 109 damage total compared to the sniper rifle's 113.

Due to its relatively low critical chance multiplier, the Abilene Kid LE BB gun cannot be relied upon to be effective in normal combat without additional critical chance modifiers, such as the Finesse perk or True Police Stories skill magazine. It can be considered more useful for stealth-based players who can rely on achieving sneak attack criticals regularly, further enhanced by the fact that the weapon is classified as silent. 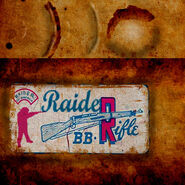 As found with the well
Add an image to this gallery
Retrieved from "https://fallout.fandom.com/wiki/Abilene_Kid_LE_BB_gun?oldid=2109203"
Community content is available under CC-BY-SA unless otherwise noted.