NPCF_FS_Abbie
“If we hadn't bothered with this stupid, stupid system... they'd all still be here. Well, guess what? If you all die, that kinda defeats the purpose! Why couldn't we just... stay in our bunkers? Why'd we even have to go out there? I'd rather eat Cram every day and never see the sun again than be stuck here... alone.”— Abbie about how how everyone she knows is dead, Everyone is gone

Abigayle "Abbie" Singh was one of the last surviving members of the Free States.

Abigayle Singh was a member of the Free States, the last surviving member when the Vault Dweller discovers her bunker. She entered her bunker at a young age along with her father Niraj, brother Calvin, dog Dax, along with three members of the Cohen family, including Daniel Cohen. Her mother, Geneva, was already deceased before they entered the bunker. They all would ride out the Great War in this bunker.

Many of her terminal entries located in the bunker described the difficult living conditions stuck in the bunker, especially on her mental health.

When the surface was hospitable enough, Abbie and her family left the bunker in 2079 and began to explore Appalachia along with the other members of the Free States, although they mainly stayed around the Mire region. At some point, Dax disappeared, and Abbie figured the dog was dead and blamed it on Calvin.[1]

Her father heard a message from Raleigh Clay about survivors attempting to rebuild life at Harpers Ferry, which the Singhs and Cohens agreed to. Although Abbie was not keen on the idea of going to Harpers Ferry, she worked briefly with Ella Ames in her clinic there, working alongside Martha Clay as well, but resigned due to social difficulties dealing with the Responders.[2]

Ella was studying deathclaw feces due to their radiation properties and named their droppings "bone meal." With the help of Abbie, Ella was able to develop a tracker to help her find the bone meal.[3] A paper note indicates that Abbie was known and respected by JD Sunday and Jesus Sunday.[4] Abbie offered to repair a broken radio belonging to Delia Webb for free. She also knew R. Fields and expressed to them about considering going south to Watoga.[5] Unfortunately, in 2086, Harpers Ferry was attacked by a massive Scorched outbreak and their work on rebuilding the town was lost.

To combat the Scorched, her father began to work on a system called the Scorched Detection System (SDS) which her father instructed her on once she was old enough and in case of his death. Suffering from Parkinson's,[6] he eventually died, along with Calvin.[7] The Cohens were killed by the Scorched. In late 2095, Abbie would eventually become one of the main contacts of the Free States to the Responders and the Brotherhood of Steel, with Maria Chavez curious about what the Brotherhood's cryptic message "Defiance has fallen" meant. As a result, Maria sent Abbie a woman through the Savage Divide to check on her, with unclear results.[8]

Being one of the last surviving members of the Free States, and the only person that knew the SDS inside and out, Abbie set up a series of recordings for any survivors to finish what the Free States started. She noted that at some point, she was certain everyone that she knew was dead; she regretted all her time working on the SDS, feeling that life would have been better if everyone simply stayed in their bunkers, as it meant they would at least be alive and she would not have to deal with her crushing loneliness.[9] She was unable to finish her work on the SDS, so she packed up a bag and went to the Top of the World to find Hank Madigan's uplink, although there is no evidence Abbie found it as it is still in a cache in the basement of the Pleasant Valley Ski Resort and Rose does not mention meeting Abbie, leaving Abbie's fate unknown.

The Vault 76 residents pick up where she left off with the Early Warnings quest.

Abigayle Singh is mentioned only in Fallout 76.

Abbie originally had a supply runner named Vivie Steinbeck whose body can be found in Watoga. However, she was removed in early 2021, along with a note. The reason for removal is unknown. 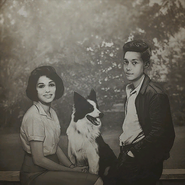 Abbie posing with her brother Calvin and their dog Dax