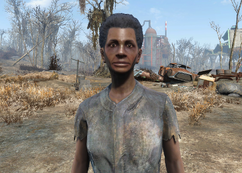 Out of the Fire

“Abraham Finch, just how big do you plan to let that junk pile of yours get?”— Abigail Finch nagging Abraham Finch about his mess

Abigail Finch is a farmer living on Finch farm in 2287.

Abigail lives on the farm with her husband Abraham and her two sons, Daniel and Jake, all of whom she deeply cares for.

She strongly disapproves of Abraham and Jake's frequent arguments, which lead to the events of the quest Out of the Fire.

Out of the Fire: If Jake Finch is successfully saved from his initiation ritual at Saugus Ironworks and brought back to the farm, he and his father will argue loudly until Abigail puts an end to their quarrel and forces them to live with each other peacefully.

She offers to purchase corn from the player character for 2 caps per ear.

Despite terminal entries on the Prydwen stating that potatoes have gone extinct, Abigail mentions peeling them for Abraham.

Abigail Finch appears only in Fallout 4.

Retrieved from "https://fallout.fandom.com/wiki/Abigail_Finch?oldid=3102625"
Community content is available under CC-BY-SA unless otherwise noted.