Abernathy farm is a location and settlement in the Commonwealth in 2287.

Abernathy farm is a homestead constructed around a large pre-War high voltage pylon; founded and inhabited by the Abernathy family consisting of Blake and Connie Abernathy, and their daughters Lucy and Mary Abernathy. By the time the Sole Survivor reaches Abernathy farm, the settlement has recently been attacked by raiders, resulting in the death of Mary.[1]

Abernathy farm covers a large, partially uncultivated area that grows tatos and melons, which the Sole Survivor can harvest for caps from Lucy. The farmhouse is a two-story makeshift structure built into the frame of the high voltage tower. The interior already has working lights, but no usable electricity.

Abernathy farm appears only in Fallout 4. 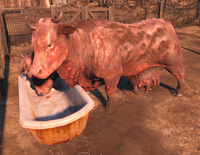 The farm at sunrise

Retrieved from "https://fallout.fandom.com/wiki/Abernathy_farm?oldid=3359244"
Community content is available under CC-BY-SA unless otherwise noted.
... more about "Abernathy farm"
RDF feed
Has platform
PC +, Playstation 4 +  and Xbox One +