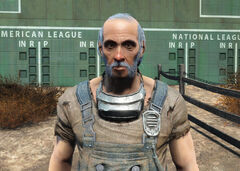 Abbot without his hard hat

“This is the Wall. The great, green guardian that keeps out the bad guys. No one's broken through the Wall. Never. Least we can do for her in return is keep her looking pristine.”

Abbot is the caretaker of the wall in Diamond City in 2287.

Abbot is one of the oldest citizens of Diamond City, whose main role is maintaining its wall.

Abbot's patient entry on Doc Crocker's terminal states that he has had a nasty abdominal scar removed and that he was very secretive of what caused it.

Abbot appears only in Fallout 4.