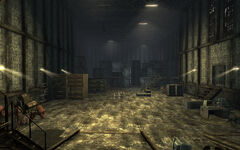 The abandoned warehouse is an unmarked location in the Mojave Wasteland, directly east of the Allied Technologies offices.

The warehouse is a single room, with half an open space with several file cabinets and desks. The other half consists of a maze of metal containers stacked high. There are stairs that lead to an empty catwalk on the western side of the room.

This abandoned warehouse appears only in Fallout: New Vegas.