The interior consists of a bed, a footlocker, a shelf, and various miscellaneous items. On the shelf next to some ammunition boxes, a copy of Nikola Tesla and You can be found.

The abandoned tent appears only in Fallout 3.

View from the front door 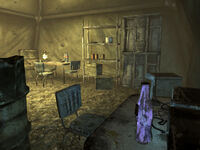 Nuka-Cola Quantum next to the radio