The Family (possibly after Blood Ties)

I Want to Drink Your Blood

The abandoned residence is found at the entrance to Arefu.

It is a small, one room house that is boarded up and inaccessible when the player character first arrives in Arefu. The animal holding pen will be occupied by dead brahmin due to The Family's most recent raid, which included the slaughter of the brahmin and terrorizing of the nearby Arefu residents.

The house will be referred to as Alan's residence if the player character has the Family agree to protect Arefu in exchange for blood packs at the end of the side quest Blood Ties, as Alan will begin to live there to hold up the Family's end of the deal. New brahmin will appear outside of the house when the problems with the Family have been resolved.

There is an owned copy of Pugilism Illustrated on the table.

A mirelurk may spawn by the brahmin pen next to the entrance of the abandoned house. It will proceed to kill all of the brahmin inside of the pen unless the mirelurk is killed first.

The abandoned residence appears only in Fallout 3. 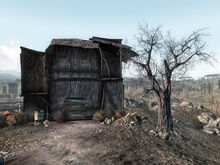 The residence before Alan moves in