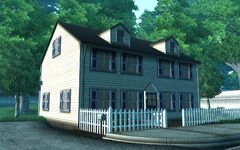 “The abandoned house. Keeps that one to himself, he does. That's where it is. That's why he doesn't want us in there.”— Old Lady Dithers on the whereabouts of the failsafe.

As with all houses in Tranquility Lane, it has two stories, with the front door entering into the living room, which features a garden gnome, cinder block, glass pitcher, broken radio, and an empty soda bottle. The other ground level rooms are a bathroom and a kitchen. Upstairs, the house has another bathroom and a bedroom with two single beds.

In stark contrast to the pristine condition of all the other houses in Tranquility Lane, the abandoned house is noticeably dark and unkempt, with much of the furniture knocked over. Outside, a doghouse can be found on the front lawn, in the right corner.

The abandoned house appears only in Fallout 3.