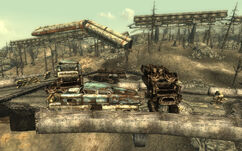 As the name suggests, it's a fort constructed of derelict cars on top of a highway. In the car fort, there are some dead raiders (whose corpses may disappear over time), a bed, six ammunition boxes, and a small crate containing random food, water, and chems. There are some mirelurks below the bridge. There is an Enclave outpost that will be nearby after The Waters of Life.

There is a random spawn location on the hillside next to this location that can spawn a single raider or 2 bloatflies.

The abandoned car fort appears only in Fallout 3.

Tales of a Junktown Jerky Vendor
Add a photo to this gallery
Retrieved from "https://fallout.fandom.com/wiki/Abandoned_car_fort?oldid=3466183"
Community content is available under CC-BY-SA unless otherwise noted.