View source
watch 24:51
Fallout Interactive Experience
Do you like this video?
Play Sound
The Pitt location

The abandoned apartments is an unmarked location in the Fallout 3 add-on The Pitt. It is a medium-sized apartment building in the Pitt Uptown, infested with trogs.

The apartments are accessible via a door in an alley way, opposite of Haven. On the ground floor, there are a few rooms and a kitchen. On the second and third floor, are additional apartments, one accessible by a broken floor ramp. Two clusters of trogs are located in the third floor apartment's bedroom.

These abandoned apartments appear in the Fallout 3 add-on The Pitt.

A transmission in Morse code can be heard in the apartments. The decoded message is a partial line ("der Abgrund auch in dich hinein" or "[And if you stare too long into the abyss, the] abyss will stare right back at you") from the Friedrich Nietzsche work Beyond Good and Evil.

On the second floor, in the room down the hall past the room with Hat of the People, it is possible to get stuck in the hole located in the kitchen. The only way out is for the player to reload from their last save point.[verified] 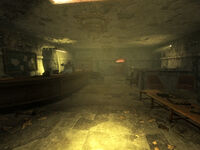 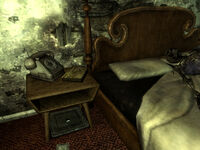 Safe with Hat of the People 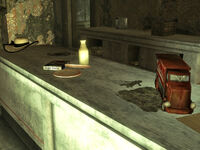 Nuka-Cola truck, cut out of a paper doll and pre-War bonnet