The abandoned Brotherhood of Steel bunker, also known as abandoned BoS bunker or Bunker 13[1] is a reinforced, subterranean installation in the Mojave Wasteland in 2281. It was used by the Mojave Wasteland chapter of the Brotherhood of Steel during their war with the New California Republic. It is the starting point for the add-on Dead Money. It is located slightly southeast of Camp Forlorn Hope.

The exterior of the bunker consists of a small grate serving as a hatch in an otherwise nondescript area. Directly to the southeast, a hollowed-out rock containing random loot can be found. If Dead Money is not installed, the grate will always be locked, cannot be picked and the key to it doesn't exist in the game. However, in certain versions of the game prior to any patches, the grate will open.

The bunker interior is simple, comprised of an entryway, a set of stairs leading to the main corridor and two accessible rooms. There are several Sierra Madre posters on the wall, and the graffiti at the entrance reads "Gone to Sierra Madre" and "I left my ♥ in Sierra Madre." There is a headless male corpse with some minor loot in the first room. This corpse is an immovable container, not a body, so although it appears to wear a Dead Money jumpsuit, the outfit cannot be taken.

A door is found at the bottom of the stairs. When the player character attempts to open the door, a warning appears about Dead Money, explaining that only experienced couriers should enter. Opening the door does not immediately start the add-on, allowing continued exploration of the bunker. To the right, after opening this door, is a hallway that has collapsed into a pile of rubble and is inaccessible.

The corridor to the left after the stairs leads to a locked door, which can be unlocked by hacking the Average locked terminal found nearby. Once the door has been unlocked, a Sierra Madre vending machine will be found. The room also contains both a workbench and a reloading workbench, numerous crafting items (scrap metal, scrap electronics, and sensor modules), several bottles of scotch, Elijah's chemistry set (which offers a jar of Cloud residue every 24 hours), a laser rifle, a combat knife, a T-45d power helmet and a Dean's Electronics skill book. The footlocker at the base of the bed (containing Father Elijah's robes) and the terminal on the desk cannot be accessed until after the completion of the add-on. Along one of the walls, someone has scribbled a series of mathematical formulas on a large blackboard.

A "drop box" (smaller version of a wall safe) can be found across from the wall-mounted terminal just outside the room. Every time upon entering the bunker again after three in-game days, there will be Sierra Madre chips and a complimentary voucher inside the drop box. If the player character won 7,500 chips in the Sierra Madre casino, the voucher will be exchangeable for 1,000 chips at the Sierra Madre vending machine. The length of time passed will account for how many chips and vouchers there will be in the drop box.

The room ahead consists of several bunk beds attached to the walls on both the left and right-hand side and underneath each bed is a footlocker. Situated in the center of the room is a table adorned with an active radio playing the Sierra Madre Broadcast on an infinite loop. Walking into this room begins the add-on.

The abandoned Brotherhood of Steel bunker appears in Fallout: New Vegas and its add-on Dead Money. 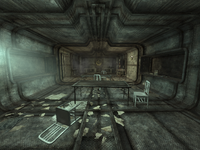 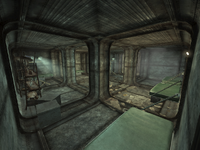 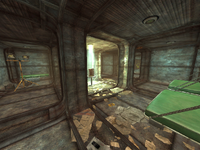 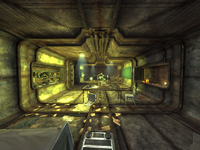 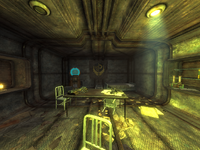 Farewells can be a time of so-