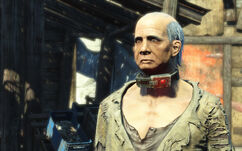 Aaron Corbett is an enslaved merchant in Nuka-World in 2287.

Aaron was one of the original settlers of Nuka-World. When Colter's raiders arrived and took over, he was enslaved. he continued to work as a weapons merchant. Despite being closely watched, he is not afraid to express his discontent with his current life as a slave. If he is freed after Open Season, he still remains cynical, but seems to be warming up to the Sole Survivor, as he mentions how "everyone owes you one".

Aaron Corbett can sell rather powerful weapons and ammunition much earlier than any other weapon merchant in Fallout 4 if the Sole Survivor enters Nuka-World before reaching level 30. This also includes the plasma gun and the Gauss rifle.

Aaron Corbett appears only in the Fallout 4 add-on Nuka-World.

Retrieved from "https://fallout.fandom.com/wiki/Aaron_Corbett?oldid=3281523"
Community content is available under CC-BY-SA unless otherwise noted.