005F3CF5
“Investigate the source of the disappearances.”

A Satisfied Conscience is a main quest in Fallout 76, introduced in the Steel Reign update.

Returning to Fort Atlas to meet up with Paladin Rahmani following the events with the Blue Ridge Caravan Company, now that they are certain that Dr. Blackburn is responsible for the disappearances to use the missing people as test subjects for his research after being denied the Brotherhood's support for it, Rahmani has the Vault Dweller speak with her, Knight Shin, and Scribe Valdez to figure out their next move in hopes of saving the kidnapped people before they become victims of Blackburn's experiments. Valdez had checked the damaged Pip-Boy recovered earlier from Uncanny Caverns and found it originated from Vault 96. While she does know all about what Vault 76 was designed for, she has no idea about Vault 96. Rahmani, Shin, and Valdez agree that the Vault is their best lead to figure out everything, and Valdez will go with the Vault Dweller to investigate, with Shin agreeing that securing the Vault's technology is also a priority to prevent someone like Blackburn getting a hold of it for malicious intent. Rahmani assigns the Vault Dweller to head to Vault 96 and use the Vault's emergency transponder to signal Valdez to join them at the entrance as Valdez confirmed that every Vault they encountered on the way from New California to Appalachia has an emergency transponder located somewhere just inside the entrance to signal for help if the Vault has been compromised.

Arriving at Vault 96, which is southeast of the R&G Station, east of Federal Disposal Field HZ-21, and south of Spruce Knob Channels, at the end of Route 103, the Vault door is pulled back slightly, allowing entry inside of it. Enter and find several Hellcat mercenary corpses scattered about, along with a living survivor, Corporal Woods. She reveals that the Blood Eagles are already in the Vault, and her crew were hired by Blackburn to help him with securing the Vault and equipment inside, but her squad was overrun by the Blood Eagles, and she herself is in bad shape, taking a bullet wound to the gut, leaving her slowly bleeding out. After asking her if the abductees are here, the player can either leave her to die, or tell her to hang on as Valdez can help her, but in the end, she succumbs to her wounds and dies right in front of the player. After Woods dies, use the terminals to signal Valdez that she can come in. Once she enters, speak to her, and she'll comment on the Vault's freezing state before seeing the Hellcat mercenary corpses and asks what happened to them. Learning that the Blood Eagles are in the Vault, she knows they already have a connection between Blackburn, the super mutants, and the abductions, but with the Blood Eagles inside, that makes things harder. Checking the terminal, she sees that they may have to deal with the Vault's automated defenses alongside the Blood Eagles because the Vault is on lockdown, and lets the player take point against anything they encounter.

Trying the terminal reveals the door is locked and cannot be opened. Valdez uses the Pip-Boy to override it, but it fries the Pip-Boy's circuits, so they'll have to use another means to get by any locked doors from here on out. Proceed deeper into the Vault to look for clues. In the Atrium, at least six Blood Eagles need to be eliminated. Once they are dead, Dr. Blackburn comes on over the P.A. to request that the Vault Dweller and Valdez leave at once as he has no grudge against them, but also can't guarantee their safety if they continue to explore the Vault to find him and the abductees. Nevertheless, enter the Mainframe Wing to search for clues, but once inside, Dr. Blackburn will come on the P.A. again as several of the Vault's robotic defenses attack, along with a few more Blood Eagles. Clear them out, and collect the marked items in the Mainframe Wing, including a holotape, note, and the second entry on the Quantum Research Lab terminal. From there, head to the Reactor Wing, or complete the optional objective with short-circuiting the fusebox. A couple of Blood Eagles guard the fusebox and door, so deal with them before opening the Reactor Wing door if unable to crack the Level 3 terminal for the door controls by short-circuiting the fusebox, overriding the terminal and opening the door that way. Head into the Reactor Wing to find more clues, and Blackburn will come on the P.A. again, asking Valdez and the player to leave once more, or face the consequences if they don't. The clues in the Reactor Wing include a holotape and a note, but expect more resistance in the Blood Eagles and a couple of Protectrons before collecting the clues. Once the clues are collected, Valdez has some concern about what they've learned so far with Blackburn, before proceeding towards the Cryonics Wing.

At the Cryonics Wing, it is discovered that Tally Lang, from back at Fort Atlas, is trapped inside the Cryonics Wing with a few others and needs help getting out. She also found a Vault access keycard that could make traversal in the Vault easier. She'll hand it over if Valdez and the Vault Dweller help her out of the Cryonics Wing. However, when Tally opens the door, several Mister Gutsies attack. She and her team, consisting of Needles, Eightball, and Dillo, who wears Blood Eagle Raider power armor, help with taking them out. Once they are all dead, speak to Tally, and if a deal was struck earlier with the keycard, she'll hand it over no problem. The player can change their mind and attack Tally and her gang, but it is the player's choice whether to spare Tally and her gang, or kill them. If spared, Tally and her crew retreat and evac from the Vault, while Valdez has some interesting words to say about the player being friends with a Blood Eagle crew. Once Tally is dealt with, search the Cryonics Wing for more clues, including another holotape with one of Blackburn's FEV research reports on it like in the previous wings, and two more notes. Once the clues are collected, Blackburn speaks again, explaining his actions to undo the damage wrought by West Tek before going silent again.

Next stop is the Research Wing. Unlock the door using the keycard from Tally, and after Valdez comments on the smell coming out of it, search the wing for more clues. However, after dealing with a snallygaster inside, this is where Cassie and the other abductees can be found. After talking with them, look for the controls to open the cells to let them out while also collecting the clues in the Research Wing. The Biology Workstation terminal has the controls needed to open the test chambers and free Cassie and the others. Select "Test Chamber 2" to gain access to free Cassie and the others. Speak to her, and she'll mention having caught a bad case of Sludge Lung. Give her a disease cure if the player has an extra one on them to help her out, and then she can be asked a few more questions. If asked if she can escape, she'll refuse out of concern for the other surviving prisoners. Valdez will radio Fort Atlas for reinforcements once the Vault is cleared and leave supplies to help the prisoners recover until the medics come. Once Cassie is assured that help is coming, resume collecting the clues in the Research Wing, and expect another P.A. message from Blackburn in the process as you look for the clues, including another holotape of Blackburn's FEV research logs, another note, and an entry on the Research Terminal marked "#144H".

Once that is done, the final stop is the Vault Overseer's Office. Use the keycard to take a shortcut back to the Atrium and then enter the Overseer's office from the door left of the main one to the Workroom. However, the card reader fails to acknowledge the keycard, and Blackburn comes on the P.A. again, pleading for the player and Valdez to leave him alone. Talking with Valdez has her suggest looking for a utility room where they can override the hydraulic controls to the door. Head over to Utility Room 1, left of the door to the Research Wing, open the door using the keycard, and use the console inside to override the hydraulic controls. It can be done with Strength, Intelligence, a bladed weapon, or just smash the controls and hope for the best. Whatever is chosen, Valdez will comment on the option chosen, before suggesting heading back to check to see if the door has opened now. The Overseer's door has indeed opened, so head up to confront Blackburn.

Blackburn surrenders without a fight, and can be confronted about his research into the FEV and everything regarding his research, including creating more super mutants, which causes Valdez to erupt at him with reminding him of the attack on Fort Atlas because of his research. Nevertheless, Blackburn admits that his research is still for the betterment of humanity, even if it means he rots in Hell for his sins regarding it. Per earlier orders, make certain that Blackburn is brought in alive to stand trial for his crimes. Grilling him further reveals that his FEV research is complete and it is too late to stop his plans from coming to fruition. Valdez permits the player to head back to Fort Atlas while she waits for the medics to rescue the prisoners while she escorts Blackburn back to the fort personally, completing the quest and starting the final one, The Catalyst.

, Plan: Blackburn's bungalow, and a variable amount of random consumables, aid items, grenades, or mines. Additional XP can be awarded, depending on how the the hydraulic puzzle is solved; using the blade grants 25 XP, passing either the Strength or Intelligence check grants 75 XP. 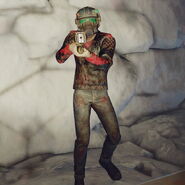