A Nice Day for a Right Wedding
Overdose

Fallout 3
“This is a Quick Fix. I mean that`s the name of our shop.”— Cindy Cantelli

A Quick Fix is a drug and medicine shop run by Cindy Cantelli in the Rivet City market in 2277.

A Quick Fix is a small market stall situated in Rivet City's marketplace. It consists of shelves along both sides and a counter on the lefthand side, with a cash register towards the back. There is also a large metal trunk at the back to the left and a small chair to the right on which Cindy sits during the day.

The inventory of the store consists of various chems, including ant queen pheromones, which can be bought and given to Angela Staley for the unmarked quest A Nice Day for a Right Wedding. A Quick Fix is one of only two stores where the pheromones can be obtained, aside from going to the locations where there are ant queens.

The key to the store's inventory can be obtained by killing both Cindy and Paulie Cantelli. The key will be on the corpse of the last person killed (as Paulie sneaks to the store at night, he would have the key too).

Gum drops can be found towards the back of the right shelf, which cannot be purchased and must be stolen.

A Quick Fix appears only in Fallout 3. 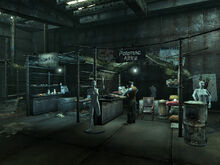