23h
“Raiders captured and attempted to domesticate a Deathclaw. It did not go well. They all need to die.”

A Poorly Thought-Out Plan is a single stage overseer quest in Fallout Shelter.

This quest requires dwellers over the level of 44, a Strength of 6 each, and Junk Jet class weapons. From there, the objective is to kill the deathclaw and the leader before returning home.

The right room has the raider leader accompanied by five raiders. Upon defeat, they drop a lunchbox, and the raider leader has a plasma rifle on his corpse. The top floor is optional, with the room on the right containing a pair of raiders. The left room contains a group of four raiders. 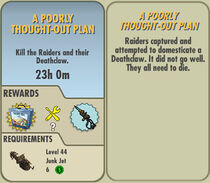