20h
“There's a new Vault in the Wasteland, and it's run by Raiders! Vault-Tec is long gone, so who could have possibly constructed Vault R41D? Time to investigate...”

A Pale Imitation is a single stage overseer quest in Fallout Shelter.

On the second floor are two pairs of raiders, one in each room. On the third floor are another pair of raiders and a group of three radroaches.

On the bottom floor is an optional raider leader fight accompanied by three more raiders. In the room after, the "overseer" can be recruited to one's vault, and there is one final pair of raiders in the last room.

When completing the path to the objective, you will not receive a quest clue.[verified] 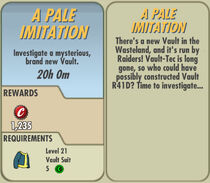