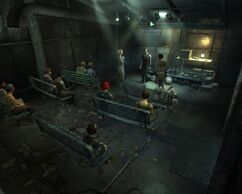 The marriage of Angela Staley and Diego

“Well, one of us is. Sometimes it seems like he doesn't even know I'm there.”— Angela when asked about her and Diego

A Nice Day for a Right Wedding is an unmarked quest in Fallout 3.

Angela Staley is in love with Diego but since he is an acolyte, he cannot return her affection. After chatting with Angela, the Lone Wanderer learns that she wants some ant queen pheromones so that she can seduce Diego. The player character can also unite the couple by lying to the priest or conversely influence Diego to abandon the girl in favor of the church.

Angela: I have something special for you, but I can only give it to you in private.
Diego: We’re not alone, so it'll have to wait. Maybe later today.
Diego: Angela, I'm not sure you should spend so much time around me? I am to be married to God soon.
Angela: Wouldn't you rather be with a real girl? Maybe you should try it, before you decide.
Diego: Lord, give me strength.
Angela: Diego, do you think I’m sexy? I mean if you weren't a priest and everything, would you be turned on by me?
Diego: Well, I... uh, that is... sure. You are incredibly sexy - not that I'd noticed. I am going to be a priest. And they don't, um... well, you know.

The name of the quest is a play-on-words referencing the lyrics "It's a nice day for a white wedding" from the song "White Wedding" by Billy Idol.

Retrieved from "https://fallout.fandom.com/wiki/A_Nice_Day_for_a_Right_Wedding?oldid=3351338"
Community content is available under CC-BY-SA unless otherwise noted.
... more about "A Nice Day for a Right Wedding"
RDF feed
Has platform
PC +, Playstation 3 +  and Xbox 360 +