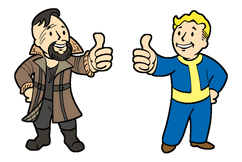 Elder Maxson has ordered the Sole Survivor back to the Prydwen for their final debriefing. They are awarded the title of sentinel and granted a jetpack for their power armor. Maxson informs the Sole Survivor that quests continue to be available at Cambridge Police Station and from Kells. In addition, Reactor Coolant (a request from Proctor Ingram) is now available.

Upon returning to the Prydwen, Elder Maxson may be residing in his personal quarters on the main deck rather than the bridge, making it impossible for his dialogue to advance any further, preventing the quest from being able to be completed. [verified]

Retrieved from "https://fallout.fandom.com/wiki/A_New_Dawn?oldid=3035951"
Community content is available under CC-BY-SA unless otherwise noted.