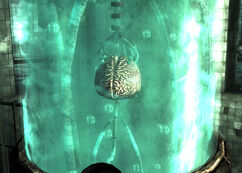 Complete A Meeting of the Minds

“That bastard! That... BASTARD! He killed my pups! Nearly killed ME! For WHAT?! He doesn't have the body to fuckin' do it himself, so he tried to blow me up? ME? Well, this ends today. Desmond Lockheart will finally win out. I know where he is. He overplayed his hand this time. You and me are going to walk in there and end this.”— Desmond Lockheart

A Meeting of the Minds is a Fallout 3 main quest and achievement that is added to the game with the Point Lookout add-on.

After watching the Calvert Mansion explode, the Panic Room can be entered through a hatch in the ruins. There is some minor loot including ammunition and food, such as a Nuka-Cola Quantum and two very rare gum drops.

This mission begins slightly differently depending on who was sided with in Thought Control, either Desmond Lockheart or Professor Calvert. In either case, go to the Point Lookout Lighthouse where a section of the floor slides away. The final showdown takes place in St. Aubin medical facility, a secret underground lab.

The player character installed the cogwave jammer and sided with Desmond.

' Note: This route makes Desmond essential until the final choice.

The player character destroyed the cogwave jammer and sided with Calvert.

Making Your Way to the Brain

Once inside the lab, begin making the way down with Desmond, fighting turrets and several robobrains along the way. Desmond can be allowed to run ahead and engage first; if hit enough, he will become unconscious but will not die. If one has the Robotics Expert perk, then it is possible to deactivate the robobrains while they are distracted by Desmond.

The first room on the left from when entering the lab includes three first aid boxes and a Gatling laser. In the next room directly downstairs, use the terminal to deactivate the turrets and pick up a Mesmetron power cell and microfusion cells.

In the next section, the first room on the left includes several types of energy weapon cells. The first room on the right is Dr. Stewart's office and includes an average safe with a Stealth Boy and other random loot, an ammo box with microfusion cells, and three pre-War books. The terminals in this room and those thereafter contain background notes on the lab. The last room before the stairs includes several more energy weapon and Mesmetron cells.

The stairs lead to a round room (also with Mesmetron cells) with two doors, one open. In the room on the right lies a Level Beta security badge for access to the next area. A robobrain sentry is stationed behind a locked door in this room that has the same badge. The next level down has operating rooms; the second room on the right houses a bunch of chems and another robobrain. It has the Level Beta security badge; a copy of it lies on a table in the corner. Use the terminal to unlock the door at the end of the hall. The next room has an easy safe with a Stealth Boy and a lot of caps, as well as another Gatling laser and more energy weapons/ammo.

More stairs lead down to a hallway with several doors, all leading to bunks. Continue forward to eventually reach Calvert's room, where the Brain himself resides in a massive glass tank surrounded by inactive Protectrons and several apparently non-functioning Protectrons.

If Desmond was not killed earlier, it is now time for the final choice. Desmond and Calvert will have a short, angry conversation, each of them claiming to have the Lone Wanderer's support. (Waiting too long, will cause the dialogue to loop). Eventually, a decision will have to be made of which one to kill. If spoken to, Calvert will offer the greatest thing any human could ever hope for in exchange for killing Desmond...

If siding with Desmond, shoot at the Brain's glass tank until the glass shatters or attack one of the docile Protectrons. (Desmond becomes temporarily essential until Calvert is completely dead.)

After the Brain is dead, any remaining robots will be disabled and Desmond can be spoken to. He will be overjoyed to have finally won and remarks that everything that Calvert stole from him is finally all his (although he's still a bit rude). Desmond gives the player character the exit key.

After speaking to Desmond again, he will say that after he's done in the lab he will go north to confront another one of the "players". He refers to this contest as a "microcosm of the old world". The option of killing Desmond is present but not mandatory.

If taking Calvert's side, simply shoot at Desmond or place a grenade in his pocket. (Calvert becomes temporarily essential until Desmond is completely dead.)

Once Desmond is dead, the Professor will offer his reward as the greatest thing any human could ever hope for... DEATH! At least he'll try, at which point he will activate some of the previously inactive Protectrons forcing the player character to destroy Calvert as well.

In the sealed room, there are 2 ammunition boxes, a safe, 2 first aid boxes, some energy weapon ammunition, some misc. items, and of course, the microwave emitter. There is also a ladder leading outside.

To the lighthouse with Desmond

To the lighthouse without Desmond

Retrieved from "https://fallout.fandom.com/wiki/A_Meeting_of_the_Minds?oldid=3381444"
Community content is available under CC-BY-SA unless otherwise noted.