A Map to the Stars

A Map to the Stars

2h
“The Overseer of 404 appears to have a way to get in contact with the publisher of the New Boston Bugle. She's our ticket to stardom!”

A Map to the Stars is an overseer quest and part of Zines from the Commonwealth multi stage questline in Fallout Shelter.

This quest takes place in Vault 404, which has a layout of five floors. Enemies include raiders and their leaders. The first floor has no enemies. On the second floor, there are two rooms, one of which has three raiders and a leader. The third floor has more of the same. The objective is on the fourth floor, where the dwellers will fight more raiders and, in another room, meet three Vault 404 dwellers, who tell them they are going to Vault 120. The room the objective is in contains two Nuka-Cola Quantum, a rare outfit, and a rare weapon. 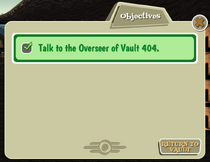