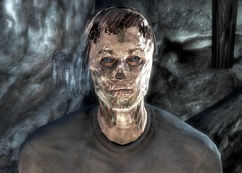 Argyle, when he was still alive.

“We got separated, a long time ago, and never reunited. If you find Argyle out there, somewhere, you be sure and tell me! Okay?”— Herbert "Daring" Dashwood

A Manhandled Manservant is an unmarked Fallout 3 quest.

Argyle has not been seen since he was separated from Herbert "Daring" Dashwood during their escape from Rockopolis. The retired adventurer refuses to believe his manservant died in that battle though, instead believing he is still out there somewhere.

Inside the safe are bottle caps, Mentats, a mini nuke, Rad-X, bottlecap mine schematics, a Stealth Boy and a stimpak. Taking any of these will not result in him becoming hostile, nor will any guards that witness the player character stealing (see Bugs section.)

Retrieved from "https://fallout.fandom.com/wiki/A_Manhandled_Manservant?oldid=3205542"
Community content is available under CC-BY-SA unless otherwise noted.