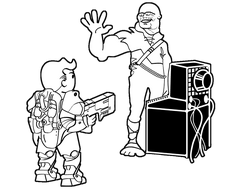 “As long as that abomination lives, he's a threat to the Brotherhood. The time has come to deal with him.”— Lancer-Captain Kells

A Loose End is a Brotherhood of Steel side quest in Fallout 4.

If Virgil still lives, the quest begins when the Sole Survivor speaks with Lancer Captain Kells during Liberty Reprimed after convincing Madison Li to work on Liberty Prime (or alternatively, speaking with Professor Scara), or after the side quest Duty or Dishonor is completed. He informs them that the super mutant Virgil must be killed. The Sole Survivor then must find and talk to Virgil. They will then have the choice to either kill Virgil or spare him and lie to Captain Kells. Alternatively, Kells can be convinced with a Charisma check that Virgil has been cured and is no longer a threat; this option may be taken while receiving the quest or after going to meet with Virgil. After picking either option, the Sole Survivor must report back to Captain Kells who will reward them with the Visionary's T-60c helmet.

Retrieved from "https://fallout.fandom.com/wiki/A_Loose_End?oldid=3449874"
Community content is available under CC-BY-SA unless otherwise noted.