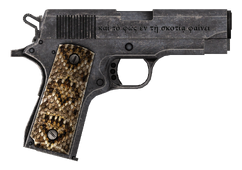 A Light Shining in Darkness is a unique weapon in the Fallout: New Vegas add-on Honest Hearts.

A unique variant of the .45 Auto pistol with a shortened barrel, it features a custom skeletonized hammer and trigger; commander length slide and a snake-skin grip, along with the etched Greek text "καὶ τὸ φῶς ἐν τῇ σκοτίᾳ φαίνει (kaì tò phõs én tẽ skotía phaínei)" on the right side and "καὶ ἡ σκοτία αὐτὸ οὐ κατέλαβεν (kaì é skotía aútò oú katélaben)" on the left side, which translates as "And the light shineth in darkness and the darkness comprehended it not."[1] It also has "trench" sights (a groove running along the top of the pistol which the player character aims down), rather than having a rear notch and a front post.

Like most unique weapons, weapon modifications cannot be added to this firearm. Compared to its standard counterpart, it has greater DPS, less spread, greater critical chance and damage, a greater rate of fire and greater durability, albeit having one less round in the magazine. Unlike the .45 Auto pistol, when aiming down the trench sights, the weapon zooms in more than a regular, un-scoped pistol, making longer-range encounters much easier. As with the .45 Auto pistol, it is considered an improved holdout weapon, and can be concealed and taken into weapon-free locations so long as the player character's Sneak skill is 50 or greater.

A Light Shining in Darkness can fire a total of about 1,245 rounds, the equivalent of 208 reloads, from full condition before breaking.

It is carried by Joshua Graham and can be retrieved from his corpse if he is killed. Alternatively, it can be found in a footlocker at the southern passage in Zion Canyon after completion of the Honest Hearts main questline.

If loading a saved game from the main menu in which the A Light Shining in Darkness is equipped and drawn, the reload animation takes twice as long as normal. This can be solved by simply switching to another gun and then back again. [verified] 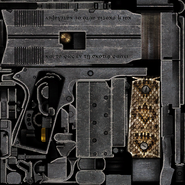