A Labor of Love

A Labor of Love

“The big day is almost upon us. The idea was to have a wedding in a natural setting, but since it's too dangerous outside we'll use a nearby cave instead. We just need to sterilize it.”

A Labor of Love is an overseer quest and part of the Book of Wuv multi-stage questline in Fallout Shelter.

This quest takes place in a mine with five floors. Enemies include mole rats in groups of three to five, with the occasional brood mother. Near the entrance of the mine is a group of three Brotherhood of Steel members. Choosing the second dialogue option will reward the player's dwellers with a Brotherhood of Steel uniform, the other options will result in a fight.

Near the center of the mine is a group of three ghouls who can be spoken to. Choosing the second dialogue option will avoid a fight. There is rare junk and some stimpaks in the same room as the ghouls. At, or near, the bottom of the mine is a brood mother accompanied by multiple mole rats. Upon defeat, it yields a double-barrel sawed-off shotgun.

"This cave ain't big enough for the both of us!" 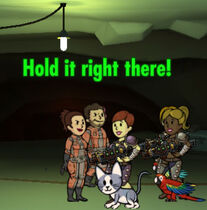 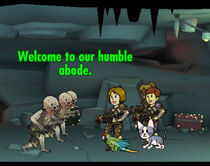