005F38F1
“Appalachia is under attack. The Brotherhood won't let this go unanswered.”

A Knight's Penance is a main quest in Fallout 76, introduced in the Steel Reign update. It is the first quest for the second act of the Brotherhood questline.

The quest starts automatically once The Best Defense quest has been finished, and prompts the Vault Dweller to meet up with Russell Dorsey outside of Fort Atlas. Dorsey informs them about super mutant attacks taking place across the region, and hints that they may originate from the Uncanny Caverns. He then asks them to relay that information to Paladin Rahmani and Knight Shin inside the fort.

Once inside, Rahmani and Shin are found arguing over the patrol schedule in the armory on the first floor, and after initiating dialogue with Shin, can be told about the super mutant attacks. Shin immediately wants to search for their origin, while Rahmani points out that this course of action will leave many people defenseless. One can then agree with either of them, or simply point out that Foundation believes the Uncanny Caverns to be the source of the attacks.

Shin then tasks the Vault Dwellers with briefing Initiates Norland and Hewsen, to which Rahmani grudgingly agrees. Hewsen is found downstairs and is seemingly unprepared for her first field mission.[1] Norland is found resting in one of the beds on the first floor, in the barracks opposite the armory, and is ready for duty in an instant. After speaking with both, proceed towards the Uncanny Caverns.

Upon entering the cavern, the Vault Dweller teams up with Hewsen, Norland and Shin, the latter will hold a short mission briefing. Upon descending the stairs, Hewsen will joke about taking a picture of the "Fort Atlas spelunkers," and the Vault Dweller may humor her by taking a picture of the squad with their ProSnap Deluxe camera, resulting in unique comments by all three. The squad then progresses further down into the caves, until they reach a dead end and have to defeat three floaters. Speak once more with Shin to evaluate the situation, an optional Intelligence 4+ check can be passed to receive praise from him.

The new task is to search for two ways to progress further. The first way requires to examine the purple-illuminated rock slide east of Shin, which reveals that tools are required to dislodge the rocks. The second way involves examining the teal-illuminated crevice on the southeastern wall, which reveals that someone without armor may squeeze through it. Upon examining both locations, return to Shin and report both findings. He then tasks Norland and Hewsen with crawling through the crevice.

The Vault Dweller is then tasked with finding a way to get past the rock slide. For this purpose, they may acquire additional tools. The first tool is a dynamite bundle, found in the duffle bag in the "Night Kid room" behind Shin. The second tool is a shovel stuck in the ground next to a red toolbox, slightly south of the rock slide. Once both items are acquired, the Vault Dweller may interact with the rock slide again, giving them the following options to remove it:

Whichever approach is chosen, the rock slide collapses, and Shin and the Vault Dweller get attacked by three super mutant berserkers. After the fight, a short conversation with Shin takes place, until he receives a radio call from Hewsen. Follow him afterwards to find the corpse of Norland on the bridge, and have another chat with Shin. Follow the trail of blood into the southern cavern and enter the hidden crevice.

Upon entering, follow Shin until finding Hewsen in the central cavern. A cutscene takes place, in which Shin utilizes his power armor to save Hewsen from an explosive trap. Immediately afterwards, two waves of super mutant berserkers rush into the cave. Talk with Shin after they are defeated.

While Hewsen tends to Shin's injuries, head to the northeastern corner of the crevice. Behind a rock is a huge gore pile with bloodied skeletons, one of which has a damaged Pip-Boy attached to its arm. Take it and return to Shin, who recommends showing the device to Scribe Valdez back at Fort Atlas.

Travel back to Fort Atlas and hand over the damaged Pip-Boy to her, which concludes the quest, speaking with her also starts Missing Persons. 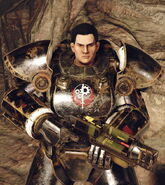 Shin mourning the loss of Norland