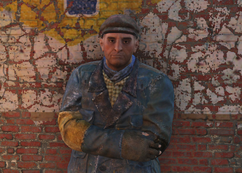 “Hey you. This is my turf. And I don't appreciate what-you-call-ems - trespassers. Beat it.”

AJ is an independent chem pusher working for Sinjin operating in Goodneighbor in 2287.

AJ is one of the many drug dealers living in the settlement of Goodneighbor. He operates independently of any major supplier and is notorious for peddling drugs to anyone and everyone, even young children. This eventually prompts Kent Connolly to send the Sole Survivor (as the Silver Shroud) to hunt him down and kill him. He conducts most of his deals in the alleyway where Bobbi No-Nose's hideout is located, always accompanied by two bodyguards.

AJ is an informant for the Institute, as evidenced by a terminal found in the Synth Retention Bureau division.[1]

AJ appears only in Fallout 4.

AJ and his bodyguards
Add an image to this gallery

Retrieved from "https://fallout.fandom.com/wiki/AJ?oldid=3266200"
Community content is available under CC-BY-SA unless otherwise noted.