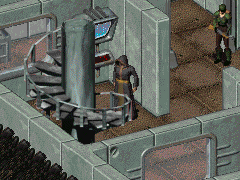 “Perhaps I can ease your troubled soul. What do you need?”

AHS-7 is an aligned hub seeker and one of the leaders of the Hubologists in 2241.

He is AHS-9's second in command. He serves as the representative to San Francisco's Hubologist base and introduces newcomers into the cult. Similar to the Enlightened One, he is able to perform a zeta scan, which is necessary to join their sect.

Despite his higher ranking than most other Hubologists, he wears the same gray standard robes. His codename, "AHS-7" indicates that he has cleared seven levels of neurodynes from his spirit.

AHS-7 appears only in Fallout 2.

Retrieved from "https://fallout.fandom.com/wiki/AHS-7?oldid=3350776"
Community content is available under CC-BY-SA unless otherwise noted.