The AER14 prototype is a unique energy weapon in Fallout: New Vegas.

The AER14 uses two microfusion cells per shot and has a unique green laser instead of the normal red beam. It does not have iron sights, and the modifications on the exterior of the frame obscure the sight picture. The AER14 cannot be modded using laser rifle mods, but it can be repaired with normal laser rifles.

The AER14 prototype can fire a total of about 495 times using standard cells, the equivalent of 42 reloads, from full condition before breaking.

The gun was designed by Joshua Sawyer, who stated that the science and math involved was the result of research and consulting with a friend who was experienced in laser physics.[1]

In third-person, the circuit boards in the stock may seem to disappear and reappear depending on the angle they are viewed from and the movement of the character holding the weapon. [verified] 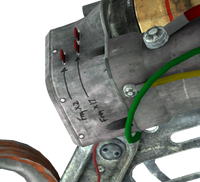 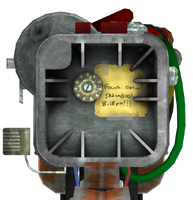 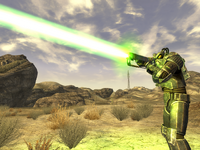 As found in Vault 22