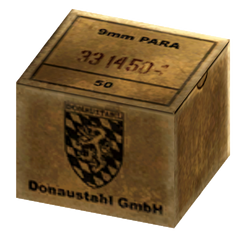 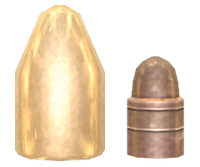 The 9mm round is a type of ammunition manufactured by Donaustahl GmbH in Fallout: New Vegas.

Before the Great War, 9mm was the preferred type of ammunition for small weapons in the American Southwest, while the military and the eastern and western seaboards tended to favor the more powerful 10mm ammunition. 9mm was infamous for its inferior lethality and has kept that reputation even after the Great War.[1]

The 9mm is a medium caliber auto-pistol round, suitable for use in handguns and submachine guns.

Standard and JHP 9mm rounds can be crafted at a reloading bench. A single cartridge requires the following ingredients:

Breaking down a standard 9mm round yields:

Hollow point bullets mushroom and break up on impact, causing massive trauma on fleshy, unarmored targets. However, this also means they break up when they hit things like armor plate, drastically reducing the weapon's penetrating power.

These "overpressure" rounds are designed to fire at a higher internal pressure than standard ammunition. This ensures higher projectile velocity and stopping power, and affords a slight armor piercing ability but at the cost of requiring more maintenance than usual. +P ammunition can be bought at most vendors in small quantities, but can be purchased in mass quantities from Bardon at Hoover Dam.

A new ammunition added with the add-on Gun Runners' Arsenal, JHP, or jacketed hollow point, uses a metal-clad bullet which retains most of the damage bonus of ordinary hollow point rounds, but with a less severe armor penalty.

The 9mm ammunition is intended to be the real world 9x19mm Luger/Parabellum/NATO round.[2]

Although +P rounds are available from most vendors, their scarcity from some vendors, particularly Gun Runners, appears to be unintentional. Specifically, +P rounds are not included in a vendor list which contains all other non-standard types of bullet ammunition.[verified]