“A Colt 6504 9mm autoloading pistol. Each pull of the trigger will automatically reload the firearm until the magazine is empty.”— In-game description, Van Buren tech demo

The 9mm autoloader or Colt 6504 9mm autoloader is a weapon that was to appear in Van Buren, the canceled Fallout 3 by Black Isle Studios. It also featured in the Van Buren tech demo.

This gun is counterpart for the Colt 6520 10mm pistol present in Fallout and Fallout 2. It was gun was planned to be implemented in Van Buren considering fact, that 9mm ammunition pistols are more widespread in real world, than 10mm guns.

The Colt 6504 9mm autoloader is a good weapon to use when you get it. It allows you to take ranged shots, which can be pretty helpful if your Action Points are low. However, due to the nature of the battle engine, remember to move your character away from the target, or else he'll keep on firing without moving.

Unused models and icons in the tech demo's files indicate that it could be modified with an extended magazine, a silencer, or both. 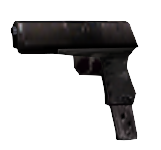 Inventory icon with the silencer modification.

Active item icon with both modifications.

Inventory icon with both modifications.
Add an image to this gallery
Retrieved from "https://fallout.fandom.com/wiki/9mm_autoloader?oldid=3144403"
Community content is available under CC-BY-SA unless otherwise noted.