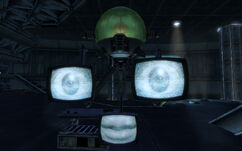 Doctor 8 is a pre-War acoustician operating at the Big MT in 2281.

Doctor 8 is a pre-War doctor who became a think tank to continue his work at the Big MT. He has lost the ability to talk due to damage sustained to his voice module during an encounter with another visitor, Elijah. Instead, he transmits RobCo sound waves, which appears in subtitles as patterned RobCo terminal symbols. However, after passing a 75 Science check or a 7 Perception check, the Courier seems to understand his language, although this does not alter the subtitled text.

His name is a reference to infinity, as the number 8 is an infinite loop, and the symbol for infinity (∞) resembles a sideways "8." This is featured in a conversation with Doctor Mobius.

Retrieved from "https://fallout.fandom.com/wiki/8?oldid=3415914"
Community content is available under CC-BY-SA unless otherwise noted.