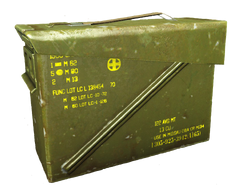 5mm rounds are a type of ammunition in Fallout 76.

This section is transcluded from 5mm round. To change it, please edit the transcluded page.

A high velocity round designed for assault rifles, the intermediate 5mm M134 cartridge[1] has been replaced by the more powerful 5.56mm round in assault rifles.[2] However, it found a new life as linked, belt fed ammunition for man-portable miniguns on the battlefield, specifically the M134 cartridge and is stored in downscaled ammo boxes designed for the 7.62x51mm NATO cartridge in Fallout 4 and Fallout 76.[3] It has also been retained as the ammunition of choice for certain models of assault rifle and paratrooper assault carbines, due to its light weight and portability.[4]

The 5mm round is a small caliber rifle cartridge produced for use by the military, these rounds came in 200 cartridge army green ammo boxes. 5mm rounds were used rather exclusively by the military with their minigun, though Gatling guns can be found in Appalachia modified to fire the modern cartridge. 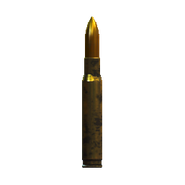