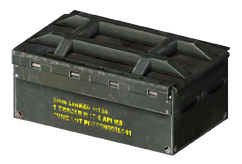 The 5mm round is a type of ammunition in Fallout: New Vegas.

The 5mm round is a small caliber high velocity rifle cartridge. It is commonly belt-fed, and is available in rather high quantities, something made necessary by the large magazine sizes on the weapons that use it. For example, the minigun loads 240 rounds at one time and fires an exceptional rate, requiring that the player character carry a huge supply if they intend to rely on miniguns. As of patch 1.3.0.452, standard and surplus 5mm rounds have a -10 DT effect.

5mm standard and JSP rounds can be crafted at a reloading bench. A single cartridge requires the following:

Breaking down a standard 5mm round yields:

A standard 5mm round, offering very good penetration value - typical for rifle cartridges, is found at plenty of locations.

Armor-piercing rounds are designed for punching through armor plating, so they have a strengthened case with a specially hardened and shaped nose. Due to the high muzzle velocity and penetrating properties of the round, damage to the target is slightly reduced. They are more common and can be purchased in larger numbers than any other type of AP rounds in game. As of patch 1.3.0.452, they now have an armor piercing effect of -25 DT, by far the largest armor piercing effect of any ammunition found in the game, capable of penetrating high-DT armors such as T-51b power armor.

Hollow point bullets mushroom out upon impact, tearing through fabric, flesh, and organs, creating a larger wound cavity. However, hollow points lack the penetrating power to punch through denser materials. This means they cannot pierce things like armor plate, drastically reducing the weapon's penetrating power. 5mm HP rounds are very rare in the Mojave, sold in very small amounts by some vendors. They are, however, less susceptible to armor than most hollow points, with only a x2 DT multiplier as opposed to x3, but this is balanced by the fact that all 5mm weapons have a low DAM output.

Surplus ammunition is of poor quality, but is available in large quantities. The rounds are slightly more damaging than standard 5mm but at the cost of more regular firearm maintenance, due to the cheaper materials used in their construction.

A sub-type added in the add-on Gun Runners' Arsenal, 5mm jacketed soft points have a hard metal cladding on the bullet with the exception of the softer lead nose. They retain all of the armor piercing power of the 5mm round, while also being more powerful than the standard 5mm. The trade-off is that it degrades the weapon faster.

Sometimes, with Old World Blues installed, the amount of 5mm rounds found in containers and other sources of loot is reduced dramatically, to roughly 30% of what is normally found. This change only affects containers found in the Mojave Wasteland, and not those located in Big MT.[verified]