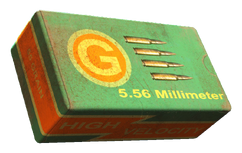 This section is transcluded from 5.56mm round. To change it, please edit the transcluded page.

The 5.56x45mm round is a rifle cartridge derived from the .223 Remington, originally developed for the M16 service rifle of the United States Army.[1][2] It is a rimless, bottleneck cartridge that offers tremendous wounding potential under the right condition. Its performance and popularity among military forces endures despite the Great War: By 2287, it has served Americans for over two centuries, from the United States Army to the New California Republic Army.

The 5.56mm round is a fifty-five grain rimless hollow-point cartridge. Being produced by Circle G ammunition, the rounds came packaged in twenty count green and orange boxes. 5.56mm rounds are mid-sized cartridges making them ideal for weapons such as the assault rifle.

With the Ammosmith perk or Ammo Factory legendary perk, the crafted amount of rounds increase incrementally, coinciding with the perk's added percentages, crafting more rounds for the same amount of materials.