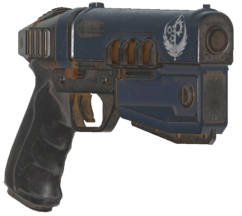 5.56 receiver (underneath the barrel)

The 5.56 receiver is a weapon mod for the Crusader pistol introduced in the Fallout 76 update Steel Dawn.

Applying this mod to the Crusader pistol changes the ammo type from the common 10mm round to the rarer 5.56 round, resulting in 16% increased damage.

Craftable at any weapons workbench after having learned the plan.

Retrieved from "https://fallout.fandom.com/wiki/5.56_receiver?oldid=3469354"
Community content is available under CC-BY-SA unless otherwise noted.