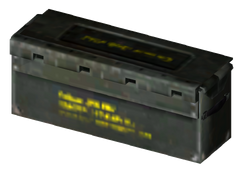 The 40mm grenade is a type of ammunition in Fallout: New Vegas.

This is a projectile that is fired from 40mm grenade launchers. They are much bigger than 25mm grenades, making them heavier and harder to fire at great speed. They deal 100 damage in a radius of 11.72 yards (10.72 meters).

The 40mm incendiary grenade deals 25% less blast damage up front (but the same amount of impact damage from the grenade itself) and has a 40% smaller blast radius (7.03 yards or 6.43 meters) than the normal 40mm, but it also causes enemies to burst into flames, dealing 6 damage every second over a 15 second period. This damage cannot normally be resisted, so incendiary grenades generally work better on armored targets.

A sub-type added with the add-on Gun Runners' Arsenal. They deal significantly more damage than a 40mm grenade, but have a slightly smaller blast radius.

Note that despite being plasma-based, this does not result in any AP reduction from Plasma Spaz.

A sub-type added with the add-on Gun Runners' Arsenal. They deal an incredibly insignificant amount of damage (only 8 points) to targets and have a 50% smaller blast radius, but deal an extra 150 damage to robots and 60 damage to power armor.

The world model for 40mm grenades is identical to the model used for the .308 caliber round in Fallout 3. 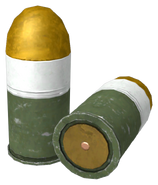